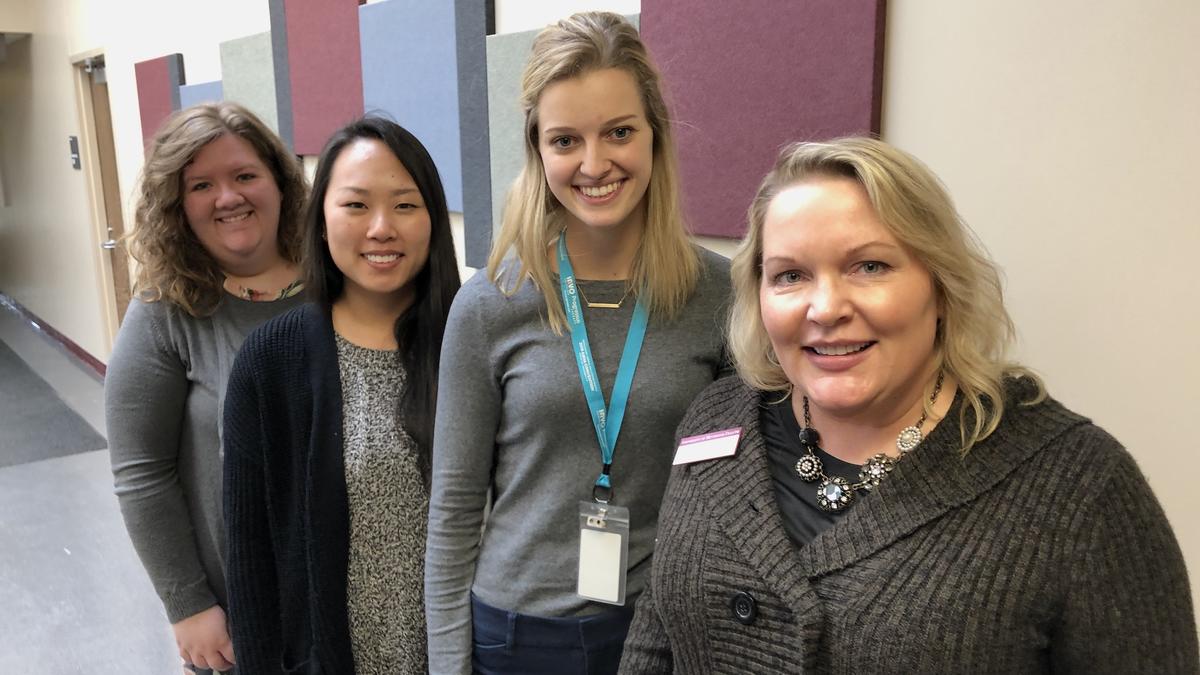 An office phone rings. A woman sits at a desk, surrounded by papers. She leans forward and reaches out to answer. She is the development officer and handles all the professional fundraising for a national medical relief organization.

The man on the other end of the phone explains that he is a family member of a donor who supports the development officer’s organization. The development officer has known the donor for many years, as the donor often supports the organization’s events and activities. The family member explains that the donor has recently been diagnosed with dementia. The two chat for a while. Care and concern is expressed by both parties.

After the phone call is over, the development officer is left with a choice. Does she continue to accept gifts from the donor, or does the organization cut all ties to avoid wrongful solicitation?

Dr. Jolene Hyppa-Martin, a UMD speech language pathologist, and her students are seeking to find answers to dilemmas such as this one. The students work with Hyppa-Martin in the UMD Communication Sciences and Disorders program.

“So many people we know have been touched by dementia,” says Hyppa-Martin. Students Cheyenne Bielmeier, Sara Hinrichs, and Lia Maegi are researching a variety of topics, each project focusing on a different aspect of how people in professional settings interact and communicate with individuals experiencing dementia. The team seeks to help professional fundraisers recognize dementia and to communicate more effectively with persons who have dementia to prevent unethical or illegal transactions, while also promoting the social inclusion of former donors who experience dementia.

The team’s work is breaking new ground. They have been caught up in a whirlwind of presentations, flying all across the country to showcase their research at a variety of conferences.

The project started when Rob Hofmann, a UMD senior development officer, inquired about how to communicate effectively with former donors who might have dementia. Development officers and other professional fundraisers have an interest in maintaining long-standing relationships with donors and philanthropists.

According to the IRS, the majority of philanthropists are over the age of 80. However, one in ten people over the age of 65, and half of the population above the age of 85, have dementia. If a donor has dementia, steps must be taken to ensure that any gifts are legal and ethical.

“Sometimes, if a determination is made that a donor has dementia, professional fundraisers cut off all ties with them,” says Hyppa-Martin. “However, we want individuals with dementia to be socially engaged, to be supported in maintaining long-standing relationships, and to be reassured that their well-laid philanthropic plans are being honored. Meanwhile, we advocate for transitioning financial management to their pre-determined, trusted advisors. We want professional fundraisers to feel comfortable when ethically stewarding relationships with their former donors experiencing dementia and to proactively plan for this situation.”

The student projects sought to understand these interactions and provide guidelines for professional fundraisers so that they can still steward relationships with individuals experiencing dementia.

Graduate student Cheyenne Bielmeier conducted a survey of professional fundraisers during her undergraduate research project. Creating a survey was more work than she anticipated. “When I presented it as a UROP, I only had three respondents,” Cheyenne says, “But in the end, we had over 400 respondents from 45 states.”

The guidelines serve to help professional fundraisers navigate interactions with former donors and include communication strategies such as using specific names instead of pronouns when describing someone or something, bringing physical objects like brochures and objects to meetings, and reminiscing about the distant past instead of asking about recent events.

Graduate student Sara Hinrichs will be taking the project to the next level. She’s currently designing a similar survey for financial planners. This profession also relies on maintaining long-term relationships with clients and ensuring that plans for retirement and nursing home/care are carried out.

“When doing this research, it’s important to ask how dementia is culturally perceived,” says Hyppa-Martin. “Some may think that dementia is a normal part of aging, but it isn’t. Little things, like asking choice questions, using non-transient cues, and managing the environment to minimize distractions, lighting and background noise, go a long way in establishing effective communication strategies.”

Second-year graduate student Lia Maegi conducted a literature review of dementia care professions outside of speech language pathology to see how communication and cognition were being supported by caregivers. She had to filter through a whopping 2,874 articles, all from journals outside of communication sciences, to come out with ten takeaways for the speech language pathologist (SLP).

When working with patients who have dementia, SLPs have the goal of maintaining as much of the current communication functions as possible as well as keep the patient socially engaged and active.

Lia learned a lot by conducting the literature review. “I found that there are so many places for SLPs to collaborate across disciplines,” says Lia. “There’s potential to socially engage patients with dementia in interprofessional practice with pet therapy, music therapy, reminiscence therapy, recreational therapy, in small groups, and with family members.”

Looking forward, Hyppa-Martin wants to see the student research published as manuscripts in peer-reviewed journals. She works weekly with a writing partner and wants to ensure this research is disseminated into the speech/language and philanthropy communities. “While these projects were designed to be manageable for one student, together they form a collection of findings that can make a contribution to our field,” she says.

Hyppa-Martin is proud of her students. “I love seeing my students get involved in their own professional development. They gain the confidence to better serve the clinical populations. It is our goal as speech language pathologists to identify and address unmet needs in the community and create a better environment for those living with dementia.”

About the Communication Sciences and Disorders Program

This article was written by UMD University Marketing & P.R. student employee, Nora Curtis, a biology major with a minor in professional writing.