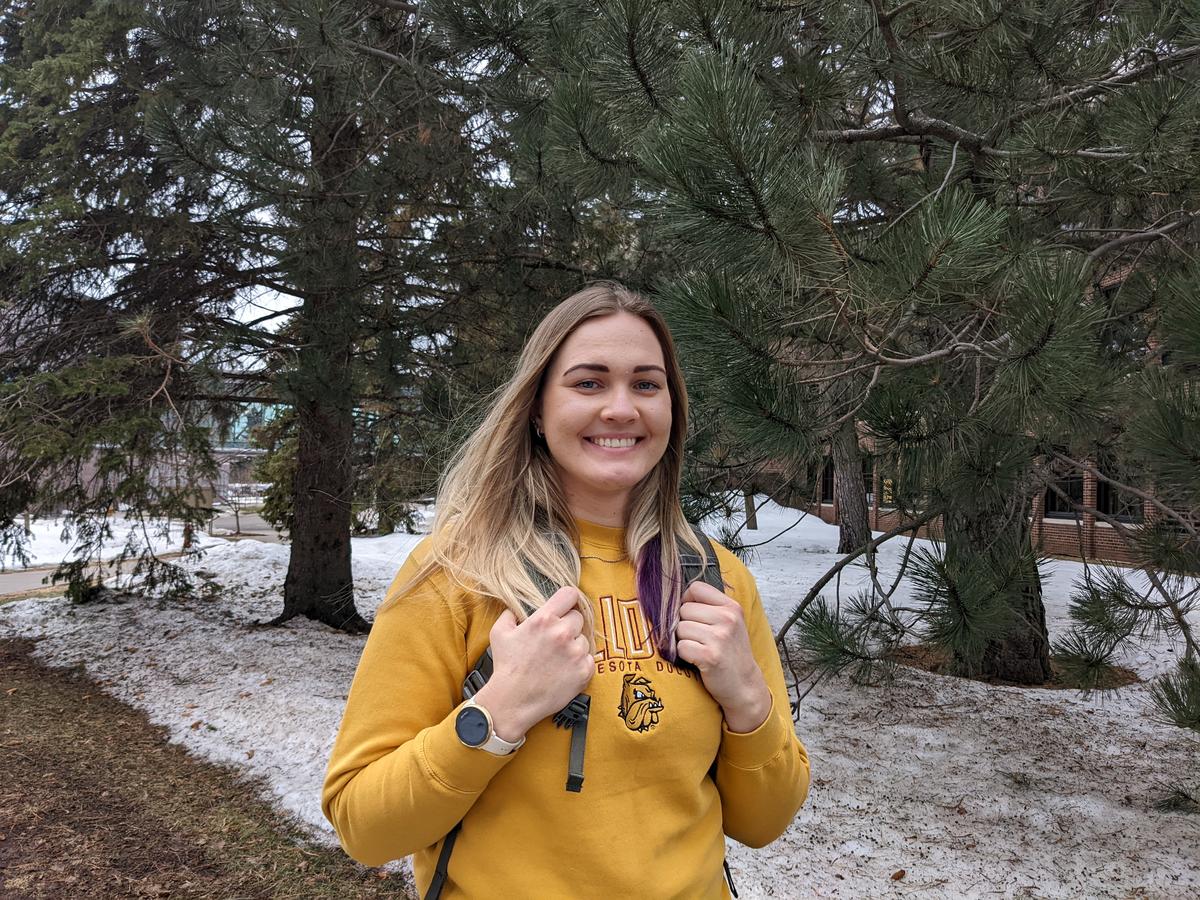 It was late on a September evening, and the forest had gone dark. Flashlights were not allowed. It was quiet, too, except for the shuffle of hiking shoes and the occasional snap of a branch. Slowly, the footsteps grew louder as hikers left the beaten path to find a place to sit. People tripped. People stumbled. A few of them screamed. The forest grew loud with the sounds of disorder. But eventually, the hikers composed themselves. The silence returned.

Janett Perv was visiting the Osprey Wilds Environmental Learning Center with her classmates and two professors. The trip was part of their outdoor education methods course, a class that is taught entirely outdoors. The idea of a pitch-black hike, however, was new.

Perv is a first-year student in the Master of Environmental Education program at UMD. She has a background in education, having spent a year teaching ninth graders back home in Tallinn, Estonia. After graduation in the US, she will apply the knowledge that she has developed in Duluth back in a classroom 4,000 miles away.

Before teaching, basketball was the driving force in Perv’s life. She began playing at age 10, and after graduating high school she moved to Sweden to play professionally. After her first season, however, education called her back home.

In 2011, Perv enrolled at Tallinn University. Here, she earned her bachelor’s degree in geoecology and played basketball for the school. She also spent a year playing for a professional team in Tallinn. Once she had graduated, Perv stuck with basketball and spent a season in Germany and another in France.

Perv again moved back to Estonia in order to pursue her master's degree. While studying environmental management, Perv came across a job opportunity that made her switch gears. A nearby school was in need of a science teacher, and she had the correct background.

Perv went to her family for advice. Her mother and grandmother had both worked as teachers, but it was never a career path she had considered. “When I told them that I might apply for a teaching job, they asked me ‘why?’ because they know that it's an undervalued job.”

Nevertheless, Perv applied and got the job. “It was frightening,” Perv said, “I had to teach ninth graders, and they are a vicious audience to teach.” Despite being nervous, Perv developed a love for the classroom. Soon enough, she switched her major and earned a master's degree in secondary school teaching.

Perv was now a full-time teacher. Outside of school, she was living in an apartment with her partner and their cat. It was during this time that Perv first heard about the Fulbright Scholarship.

It was originally Perv’s partner who wanted to study abroad. However, he wasn’t eligible for the scholarship in 2020, so Perv applied. She was accepted, and the scholarship placed her in the UMD Environmental Education program.

Perv’s scholarship was the first of its kind. “Until 2020, they only offered one-year programs for grad students,” Perv said. But students couldn’t complete their degrees and instead had to continue education in their home countries. “Now, they're offering two years so you can actually get the degree in the United States.”

Leaving home was harder this time around. “When I was younger, it was no problem moving away from home because I didn't have any obligations,” Perv said, “but now, I’m leaving behind my partner, my cat, my apartment. Oh, and my work. I really love my work.”

A New Model For Education

After she graduates from UMD, Perv wants to apply the principles of Environmental Education back home in Estonia. In the short term, she plans on returning to the secondary school where she started teaching.

But Perv doesn’t just want to apply environmental education in her own classroom. She has a higher goal. “I want to modify the science teacher’s curriculum,” she said. Introducing environmental teaching practices into higher education will not only improve students' learning, it will ultimately improve the environment as a whole.

This story was written by UMD student Jack Wiedner, who is majoring in journalism and political science. Jack works with Cheryl Reitan in University Marketing and Public Relations.