Skeeters, Ticks, and Bats—Oh My! 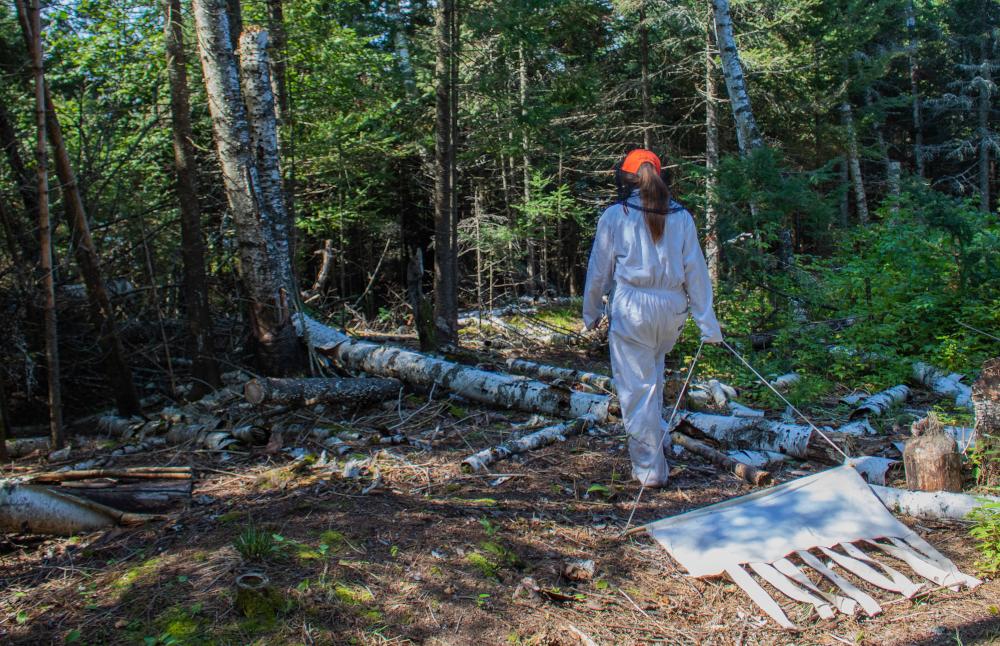 Student research at Boulder Lake has implications for health and the environment.

Raina Costello used to be afraid of wood ticks. She conquered this fear by immersing herself in the world of the creepy-crawly ectoparasite and learning more about its habits.

Now the third-year student is right at home in the woods at Boulder Lake, just 20 miles north of Duluth. Costello, who is majoring in environmental and outdoor education, started volunteering at the Boulder Lake Environmental Learning Center (BLELC) in February 2019 after taking a class with Director Ryan Hueffmeier.

“One weekend I drove up to Boulder Lake. It was beautiful. I fell in love with it right away and started spending a lot of my free time there,” she says.

When a work-study position opened up with BLELC, Costello applied and was hired soon after. Last year, she started tracking ticks and mosquitoes at Boulder Lake through a partnership with the Minnesota Department of Health (MDH). 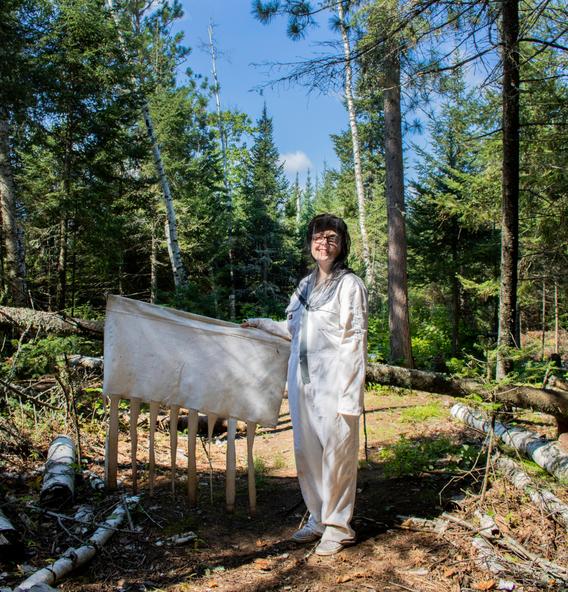 Costello collected 56,000 mosquitoes over the course of the season last year. To attract them, she fills a series of traps in several different areas around Boulder Lake each week with dry ice pellets. When the ice melts, it off-gasses carbon dioxide (as humans and animals do), which attracts the blood-thirsty insects.

“I let the traps run for 24 hours and then pick them up the next day,” explains Costello. “The mosquitoes that I catch are then put in a freezer and then mailed in containers to the Minnesota Department of Health to be tested for various diseases.”

A MDH report from last year indicated that specimens collected at Boulder Lake weren’t carrying the dangerous West Nile virus. But it did find an invasive mosquito species there. The Japanese rock pool mosquito is relatively new to Minnesota and can carry diseases like West Nile or encephalitis that can be transmitted to humans.

Because ticks also carry diseases and can pose a public health risk, the Department of Health also monitors them. Deer ticks are of particular concern as they’re the primary carriers of Lyme disease.

To gather ticks, Costello puts on a white suit with a bug net for her face and tapes off her pants and sleeves. She has four different locations where she hunts for the arachnids. “I take a drop cloth with me, which once I am on the trail, I drag behind me. I stop every ten meters to check for ticks either on me or on the cloth and if I find any, I pick them off with tweezers and place them in a vial.”

Ticks are identified on-site by species and gender and then mailed to the Minnesota Department of Health to be tested. In 2019, Costello found 98 ticks—52 were dog ticks (aka wood ticks) and 46 were deer ticks. Of the deer ticks she passed on to the MDH last year, 1 in 4 at Boulder Lake were carrying Lyme disease.

Costello has enjoyed working on this project. “It's nice to be out on the trail every week and it's helped me to become more knowledgeable about when ticks and mosquitos are the most active and what you can do to avoid them,” she says.

She says that prime time for ticks runs from the end of March to the beginning of June. Bug spray works well to deter them, according to Costello. She adds that ticks can’t control their own body moisture. “They come out more on humid days when there's moisture in the air. They like damp areas of the forest. Usually, if you can see clouds of mosquitoes, ticks will be present too.”

Costello’s work at Boulder Lake led her to develop her own research study. As part of the Undergraduate Research Opportunity Program (UROP), she started a project focused on her favorite animal—the bat.

Her research was sparked by concerns about the rising incidence of a deadly disease. “In Minnesota, bats are getting hit hard by white-nose syndrome, a disease caused by a fungus that has been found in caves and underground mines,” explains Costello. 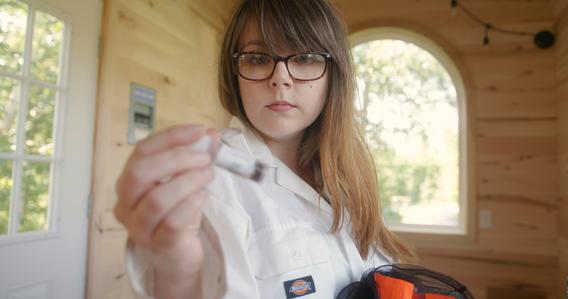 Since first being identified in the eastern United States in 2007, white-nose syndrome has quickly spread, devastating bat populations. In affected bats, “a white fuzz-like mold grows on the bat’s wings and faces—and in their noses,” says Costello. “It wakes them up during hibernation. They can‘t get back to sleep. They’re hungry and fly around in circles until they die. It’s really sad.”

White-nose syndrome spreads quickly through entire colonies. Costello points out this is particularly bad for Minnesota since we have such high numbers of mosquitoes—bats’ number one food source.

Since there’s no cure yet for this disease and no way to remove the fungus from the bats that have it, protecting habitat and recovering bat populations is the current course of action. The first step in Costello’s research is to identify what types of bats live around Boulder Lake. To do this, she’s using a wildlife acoustic monitoring system to record and distinguish bat calls, which are unique by species.

Since starting the research this summer, Costello has determined that all seven species of Minnesota bats are present at Boulder Lake. The northern long-eared bat was the second largest population she found. This discovery is significant because this type of bat is susceptible to white-nose syndrome and listed as “threatened” by the Endangered Species Act.

“Due to the data I have collected, I am now certain that the Boulder Lake Management Area and the Boulder Lake Environmental Learning Center will continue to be extremely important and helpful sites for furthering bat research and public education in Minnesota,” says Costello.

Costello’s work will influence how the forest of the Boulder Lake Management Area (BMLA), which encompasses the BLELC, is maintained. The land is actively managed by Minnesota Power and St. Louis County with sustainable logging practices. Costello intends to pinpoint the areas of forest where bats are roosting so they can be marked for preservation, ensuring bat habitat is protected.

Hueffmeier notes that he appreciates working with students at the ELC and helping them build research projects based on their interests. “With Raina it has been fun to see her applying what she’s learning in school and to see her confidence related to research grow. Her work with bats is leading to the development of a citizen science program that will allow BLELC to provide the general public with opportunities to participate in documenting bats in the BLMA." 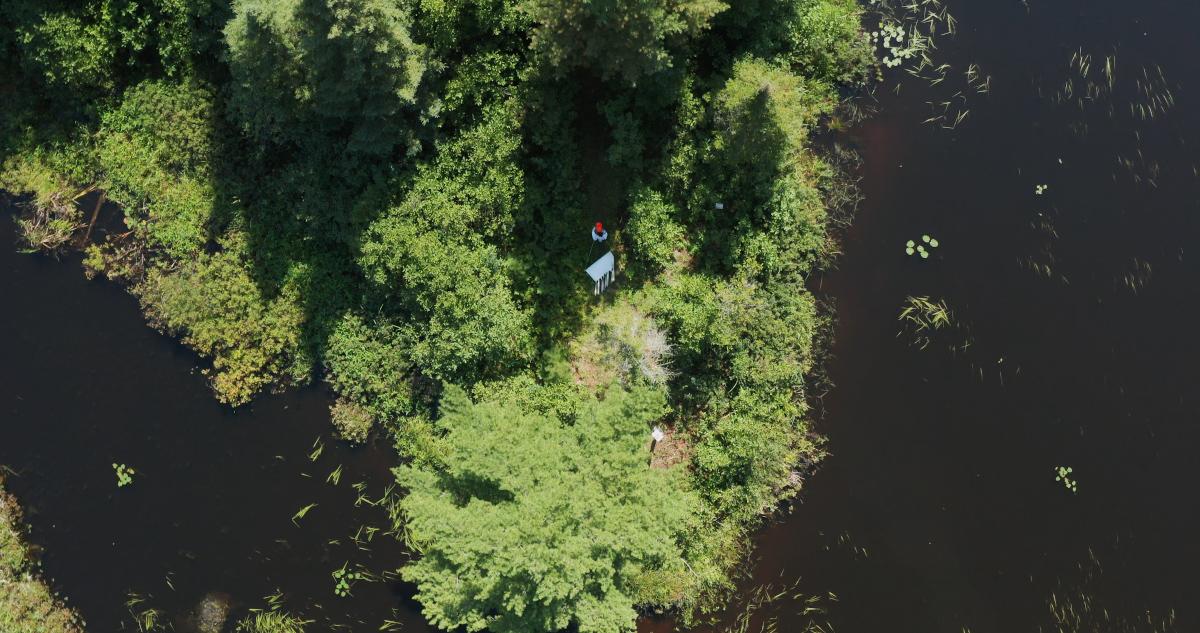