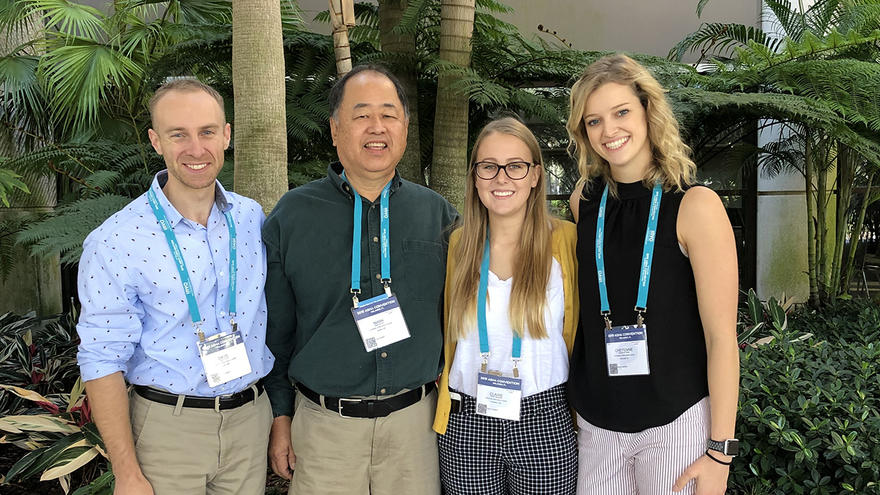 Cortical visual impairment (CVI) is the most common diagnosis for children with serious visual impairment in industrialized countries. Those with CVI can’t process what they see due to damage to the visual processing areas of the brain.

There isn’t a cure for CVI. But Mark Mizuko, professor and head of the UMD Department of Communication Sciences and Disorders (CSD), and his students have been working to develop a new CVI treatment paradigm.

David Bohil is one of several CSD students who began work on this project as undergraduates and are continuing it as graduate students. They’re using sophisticated eye-tracking technology as a tool.

People with CVI often have co-occurring conditions, including paralysis and the inability to speak, which makes treatment a challenge. That's why Bohil and his colleagues in CSD have been working on an innovative form of therapy with clients that engages their eyes with rehabilitation exercises that use moving objects, color, and contrast.

Bohil says evidence has shown that visually stimulating interventions can improve visual recognition in clients with CVI. "The eye gaze research is used as an intervention method," he explains. "The idea is to enhance their visual environment to increase their visual processing so they can make sense of the world."

During their sessions at the Robert F. Pierce Speech-Language-Hearing Clinic clients are asked to look at a digital screen and use their eyes to complete different tasks. All the while, their gaze is tracked with the latest technological tools.

It starts with simple exercises like looking at a red ball on a computer screen. Eventually, clients may be able to use their eyes to play interactive games and engage in more sophisticated activities.

Demonstrating the effectiveness of the clinic's interventions for CVI through quantitative data has been a challenge since each individual responds differently to various forms of technology. "There have been a lot of roadblocks but we have also learned a lot," says Bohil, who has presented the research at national conferences and in Japan.

Bohil points to a marked improvement in one particular client over the last couple of years. After trying out a few different forms of technology with the child, they've found an interactive tool that's producing measurable results. The team is working to find a reliable communication method for the client, combining vocalizations with eye gaze activated, symbol-based communication software.

Watching the client's evolution has been affirming for Bohil, who has long been interested in language and communication. A non-traditional student, he studied Japanese at Michigan State University and then spent time working as a linguist in the Air Force.

A few years back, he shadowed a speech therapist and was inspired to return to academia to shift his career path. "I didn't know anything about this occupation," Bohil says. "It blew me away, the way she was interacting with the child."

With this project, Bohil and his colleagues in CSD are pleased to be discovering new methods for meaningful interactions with CVI clients. “The whole purpose is to get them to communicate by whatever means is best for them,” he says.

Pictured above are David Bohil, Mark Mizuko, Claire Bieganek, and Cheyenne Bielmeier. They were in Orlando to present this research at the ASHA Convention last November.