Working On Up, Helping Youth Strive 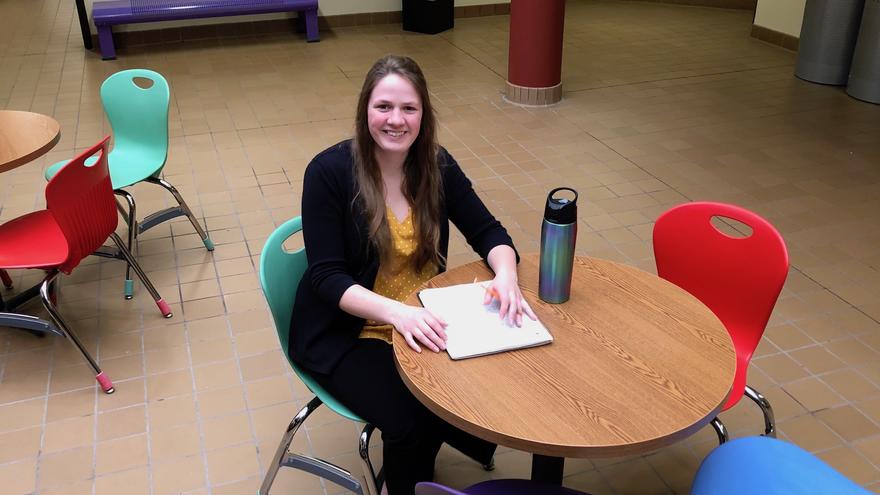 The University Honors capstone presentations will take place at 3:30 pm, Tuesday, April 23 in the Kirby Ballroom. The event is free and open to the public.

UMD honors student Kellsey Clark is surrounded by children at the Neighborhood Youth Services (NYS). There are about 30 children from kindergarten through eighth grade moving around the room. A few staff members sit in the corner with a group working on math.

Kellsey sits at a table with a first grade girl and holds up a flashcard. “Can you tell me what this word is?” Kellsey says.

The student stares at the letters on the card for a few seconds and her face lights up. “Book!”

NYS is an after-school program for youth located in the Central Hillside neighborhood of Duluth. The program is working towards specific objectives, such as providing good nutrition, improving self-esteem, and increasing academic achievement.

Kellsey spends her time at NYS working with the children on homework and other activities. She made this connection, and has had many experiences, after joining the UMD University Honors program her freshman year.

The honors program is dedicated to providing high-achieving and motivated students with learning experiences both in and out of the classroom. Volunteer work is a requirement of the University Honors program. Another component is the independently-driven scholarship capstone project which students complete during their junior and senior years.

Kellsey, who is graduating in spring 2019 after just three years, is a social work major with a minor in Latin American studies. When she arrived at UMD, what she wanted most from college was to meet people who were just as excited about learning as she was. She wanted to find a community and be challenged. It didn’t take her long to find a group of like-minded people.

During her first year, Kellsey went on a trip to Minneapolis hosted by the University Honors program. The weekend goal was to explore different cultures and explore new places.

The trip pushed Kellsey her out of her comfort zone. She tried new things and expanded her knowledge of different cultures. She went to a play, ate Ethiopian food, ate a camel burger, and bought a pair of mittens that were made especially for her. Best of all, she learned a lot about the other honor students and faculty. “I met other motivated students who valued school as much as I do.”

Kellsey’s capstone project involves her work at NYS. Her topic, How Youth at Neighborhood Youth Services Perceive School Over Time, examines how the age, gender, and socioeconomic status of K-8 grade youth affects their perceptions of school.

Kellsey recognizes that her personal experience in school was much different than the children she works with at NYS. She grew up in a small town, Park Rapids, Minn., and for her, school was exciting. "I love to learn and go to school,” says Kellsey. “It really struck me when I saw that some of these youth weren't motivated to go to school. That's why I wanted to learn more about it.”

She wants to see if there is a difference between the students who attend NYS regularly and students who only come occasionally as well as evaluate the effectiveness of the program.

Her method included performing two rounds of assessments over a course of three months. The assessment asked benchmark questions for each grade level about study habits and feelings about school and school work.

“The assessment is pretty intense so I took one or two kids back at a time,” says Kellsey. “A lot of them were unable to read, so I would have to read the questions and prompt them to respond.”

“I had to say ‘no’ but she was really excited to do the post test, and we both saw how much she improved over time.” says Kellsey.

Kellsey recalls another student who only knew how to read one or two words in the first round. Later, he was able to read ten words. “He was really excited to see the growth in himself, and I was excited to see it too,” says Kellsey.

Kellsey will be attending the Master in Social Work program at UMD this fall. After graduate school, she plans to work at a youth services agency and eventually run her own non-profit organization working with youth.

“I would love to work with a population similar to the one I’ve worked with at NYS and take on more responsibility as I work my way up.”

She hopes her research and data will not only help Neighborhood Youth Services, but also help evaluate other after-school programs in the community.

“It will be interesting to see how I can use this data to shape programming I may be involved with in the future.”

About the UMD University Honors Program