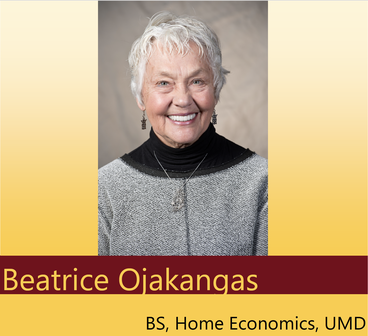 Beatrice Ojakangas graduated from UMD in 1956 with a B.S. degree in Home Economics. She has spent most of her life immersed in the culinary community through which she has made remarkable contributions to the society at a national level.

In addition to writing 29 cookbooks and several newspaper articles over the years, she has also been editor of the Sunset Magazine and starred in a series on holiday baking for the TV Food Network. She was a featured guest on Julia Child's series Baking with Julia, and appeared on Martha Stewart Living Television. She has also presented on cruise ships and taught numerous cooking classes. In her earlier years, she and her husband started a popular restaurant, Somebody's House, in Duluth. Beatrice has worked with WDSE/WRPT on a documentary covering her life.

Beatrice is a proud mother of three, and a grandmother of eight. She is active in our Duluth community and is a member of several professional organizations.