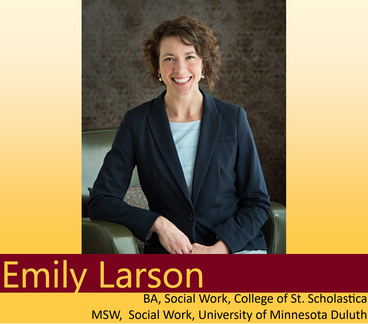 Mayor Larson earned an undergraduate degree from the College of St. Scholastica, a Master’s Degree from the University of Minnesota Duluth and is a graduate of Intermedia Arts Creative Community Leadership Institute.

Emily was elected Mayor of Duluth in November 2015 with 72% of the vote. She was inaugurated on January 4th, 2016. Prior to becoming Mayor, Emily was President of the Duluth City Council, served as a Commissioner on the Duluth Economic Development Authority and was the Council conduit to Parks and Libraries.

Currently, Mayor Larson serves as a member of the Young Women’s Initiative of Minnesota, and is a seated board member to the Great Lakes and St. Lawrence Cities Initiative and the Greater Minnesota Housing Fund. As Mayor, her priorities include sustainable energy, increasing and improving our housing stock, addressing the opioid epidemic, developing a stable and reliable long terms streets funding plan, and continuing to grow Duluth’s robust and unique economy.