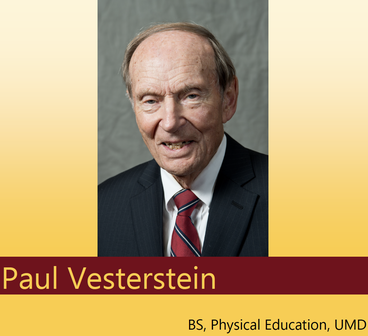 Paul Vesterstein graduated from the University of Minnesota Duluth in 1953 with a degree in Physical Education and minors in Health and Mathematics. His friends at UMD nicknamed him “The Count.” Paul, a native of Estonia, is a genuine American success story. He arrived in America in 1949 with little more than hope, his innate talents and abilities, and a strong work ethic. He came from a Displaced Person’s Camp in Europe after WWII, under the sponsorship of the Duluth YMCA. Paul worked as a counter clerk at the YMCA, as a swimming instructor, and as a counselor at YMCA Camp Miller.

While at UMD, he was a member of the ski team. After graduation, he continued to work for the YMCA in a variety of instructional and leadership roles. Over time, Paul parlayed his success, interest, and international contacts in skiing into a fledgling business of importing skiing equipment from Germany. Having determined that there was a strong market in this region for importing skiing equipment, he and a group of friends founded the Continental Ski Shop. From there his business acumen led him into other retail, travel, and real estate ventures in the U.S. and abroad.

Paul has always given back to those who have impacted his life and has been supportive of UMD. He has organized student trips to his native Estonia, served on the Board of Directors of the UMD Alumni Association, and served one term as president of the Association. He has twice received UMD’s Distinguished Alumni Award. He was UMD’s 1993 commencement speaker. He has supported business ventures in Estonia and hosted the president of Estonia on a state visit to Minnesota.