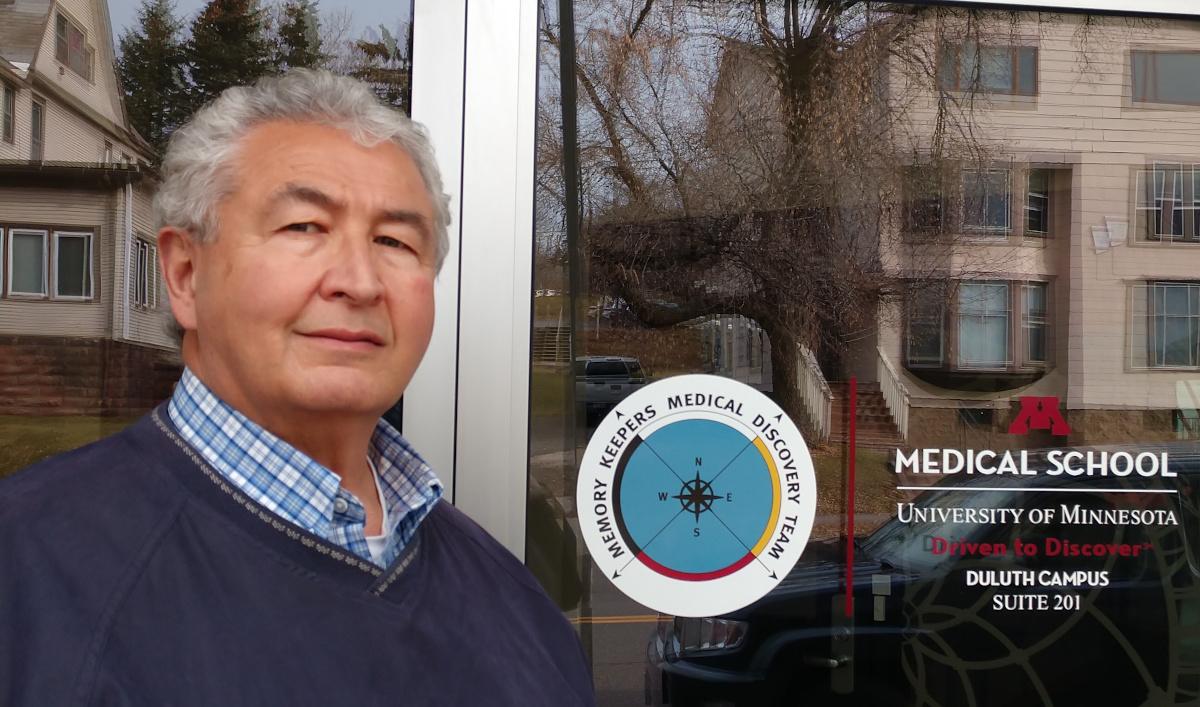 Reflecting on a retiring director’s contributions to students, UMD, and beyond.

One of the traits people admire about Rick Smith is the ease with which he forges relationships. He’s gifted at remembering people and relating to them. He likes to tell stories but he’s also good at listening and making sure people are heard.

Developing trusted relationships has been key to Smith’s work as director of the UMD American Indian Learning Resource Center (AILRC). Over the past three-plus decades, it has helped him bridge the divide between American Indian tribes and academia. It has also enabled him to assemble the country’s largest public library of culturally-specific American Indian/Alaska Native (AI/AN) scholarly materials at UMD.

Smith will officially retire on January 15. But efforts to improve access to higher education for AI/AN students and his influence on academic programs at UMD will have an enduring impact.

“Rick Smith's compassionate, practical support has helped so many students' dreams come true. His legacy of dedicated, effective program-building and service is known and respected far beyond UMD,” says Professor Linda LeGarde Grover, one of Smith’s longtime colleagues from the Department of American Indian Studies.

Smith holds a Bachelor of Social Work and Master of Education degree from UMD. He was hired as director of the AILRC in 1988. Since then, he has been instrumental to UMD’s recruitment of American Indian and Alaska Native students.

The AILRC is formally housed within the College of Education and Human Service Professions (CEHSP). Dean Jill Pinkney Pastrana recalls, “Rick Smith was one of the colleagues here at UMD who immediately welcomed me to my position at UMD and helped me to understand the unique role that the AILRC plays in the college and on campus. This set the tone for a productive relationship that has positively impacted our capacity to serve American Indian students at UMD.”

Professor Tadd M. Johnson credits Smith for his dedication to building connections between UMD and tribes in the state and region. “If you talk to Indian tribes, they can’t probably name an administrator at UMD or a professor, but everybody knows Rick Smith … He’s been out pounding the pavement, selling UMD to Indian tribes for three decades,” says Johnson, who joined the UMD Department of American Indian Studies in 2010 and was recently named the University of Minnesota’s first senior director of American Indian Tribal Nations Relations.

Having a trusted liaison like Smith helps convince kids from reservations to come and study in the City of Duluth. But because recruitment is nothing without retention, Smith’s work didn’t stop once he attracted students.

He also created a welcome and nurturing atmosphere for students at the American Indian Learning Resource Center. And whether students needed counseling, financial aid, or some other form of advocacy, he was always ready to help.

Pinkney Pastrana notes that “Rick Smith’s legacy in CEHSP and at UMD is simply immeasurable,” and points to Smith’s educational work with UMD faculty and staff. “Rick’s impact extends to his ongoing and patient work with all of us across campus who need to improve our policies and processes to support American Indian students,” she says. “His teaching and guidance on historical and cultural issues challenge faculty and staff to develop a critical understanding of our relationship with and commitment to American Indian communities and the students who come to us for their studies.”

Johnson describes Smith as “a force” who has mentored hundreds of students in his career. He’s heard plenty of stories from AI/AN graduates who credit Smith as a powerful mentor. “People look back and say, ‘Well, actually I quit once, and Rick Smith convinced me to come back to school.’”

Smith was honored with the Minnesota Indian Education Association Lifetime Achievement Award for his “outstanding leadership, contributions, and lifelong dedication to Indian education” in November 2018.

Amplifying the Voices of Indigenous People

Smith’s tendency to go above and beyond his AILRC director role didn’t end with direct student support. While at UMD, he also had an influence on curriculum and programs. He was involved in developing the Master of Tribal Administration and Governance program, which Johnson directs, and the Master of Tribal Resource and Environmental Stewardship.

According to Johnson, Smith showed up in countless meetings and consultations throughout the years to help ensure the interests of tribes were represented while developing programs. “He wants to make sure the voice of Indian Country is heard at UMD,” Johnson says.

Creating the Mishoomis Collection Library is another way Smith is ensuring the voices of American Indians and Alaska Natives continue to resonate. The AILRC started out with eight books focused on the lives and histories of indigenous people, written from their perspective. Now, it includes more than 10,000 materials, including books, videos, documents, and other resources.

This impressive library includes many rare books and the private collections of several AI/AN elders and scholars. It was originally Ruth Myers’ goal to create this incredible educational asset at UMD. Often called “the grandmother of American Indian Education in Minnesota,” Myers was one of Smith’s mentors.

Smith is thankful that so many scholars chose to leave their treasured books to the library and notes that it was “built with tremendous help from Dr. Rosemary Christensen,” who wanted to help realize Myers’ dream. “The first 900 books were donated by her. And she read every one of those books,” he says.

Though Smith is appreciative of the recognition he’s received for his decades of work, he’s quick to share the spotlight. “I’m standing on the shoulders of many mentors. I couldn’t have done it without great help and great mentors,” he says. “I have a wonderful wife and kids who support me. When you work in Indian Country and do this type of work, it’s not a five-day workweek with weekends off, it’s your life’s work. I couldn’t have done it without their support.”

In the last several years, Smith and his wife Dianna decided to give back to UMD by establishing the Commander David R. Wheat Higher Education Return Opportunities Scholarship (HEROS). Named after a UMD alum and veteran, the HEROS fund provides academic scholarships and fellowships for UMD students who are military veterans, active duty service members, and those in the National Guard.

The scholarship committee they assembled set an initial fundraising goal of $25,000 for an endowed fund. When they easily met that goal, Smith set another goal of reaching $100,000 in six years, by the time he retired.

Smith is pleased to have met that ambitious target. But he says the effort wasn’t just about raising money. “We wanted to create an awareness and remind people what our men and women in the military sacrificed for our freedom and safety—and the sacrifices their families have made,” he explains.

After a full career, Smith is looking forward to retiring—but he’s not slowing down. He plans to travel with his wife. He’ll also continue to serve others through a variety of roles including as a board member for several state and local organizations. Smith was recently invited to serve as Elder in Residence for the Memory Keepers Medical Discovery Team at the University of Minnesota Medical School.

“Rick Smith is appreciated and loved by Indian Country. That’s probably his measurement for success,” says Johnson. “That and the hundreds of students he’s helped … I hope UMD finds somebody to take over who has his level of devotion to students and tribes. It takes a while to get his type of wisdom.”

The College of Education and Human Services recognized Smith as one of its Distinguished Alumni in 2013. Learn more about Rick Smith’s impact on students and the Mishoomis Collection Library he cultivated.