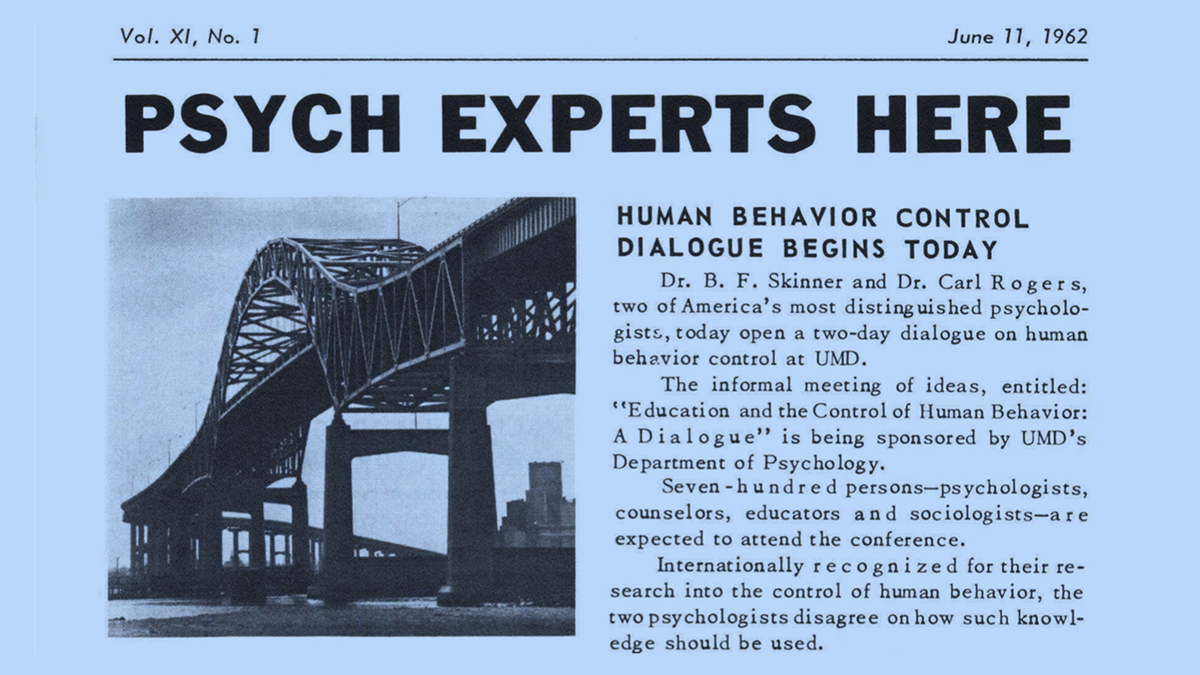 Two prominent figures in psychology had a controversial discussion at UMD 58 years ago.

In June of 1962, two of the 20th century’s most preeminent psychological thinkers converged at the University of Minnesota Duluth for what some consider the most influential psychological debate of the last century.

The event, titled “Education and the Control of Human Behavior,” took place over the course of two days, June 11-12. It brought together B.F. Skinner and Carl Rogers, two leading figures in behaviorism and humanism, respectively, to discuss their divergent philosophies on human behavior.

G. A. Gladstein, associate professor and department chair in the Department of Psychology, touted the “international importance” of the event in a May 25, 1962 UMD Statesman article. He said the conference’s goal was “to stimulate further discussion of this topic in an atmosphere which allows a free flow and exchange of ideas.”

A Duluth Herald article from June 12, 1962 reported that 1000 people attended the event, which was free and open to the public. It drew in psychologists from throughout the Midwest as well as students and professionals such as teachers and social workers. Over the course of the two-day event, Skinners and Rogers delivered their own brief presentations of their stances. After that, they had a real dialogue. An interdisciplinary panel of academics also weighed in and attendees were engaged in small group discussion.

Eric Hessler, who currently serves as associate professor and head of the UMD Department of Psychology, credits his predecessors for their astuteness in bringing the two academics together. Though Skinner and Rogers met twice publicly before to debate and give prepared remarks, UMD psychology faculty recognized a more meaningful conversation between the two could be useful for the field.

“This meeting at UMD is considered to be the most substantive interaction between these two,” said Hessler, who noted that the longer format gave Rogers and Skinner a chance to “really dive into details of both of their theories” and “better understand each others’ positions.”

The behaviorists were skeptical of variables they couldn’t observe directly, according to Hessler. Skinner conducted experiments with animal and human learning using operant conditioning. “Skinner thought that anything in human psychology, even the most complex behavior, could be explained using the basic principles of reinforcement and punishment.”

In contrast, Rogers and his humanist approach to psychology placed emphasis on free will and thought as well as other cognitive, internal aspects of psychology. His client-centered approach to psychotherapy emphasized individual choice, believing that people can be empowered to change and overcome personal difficulties.

Jim Amell, former head of the UMD Department of Social Work, wrote a paper analyzing the UMD conversation (which was largely preserved on audiotape) between Rogers and Skinner as a graduate student. Amell characterized the discussion as “contestatory” and noted that the men had “differing views on the nature of human behavior, education, and psychological intervention.”

Rogers and Skinner had a lasting impact on the field of psychology and beyond. Hessler suggested that “many of the scientific methods that psychologists use today were developed by Skinner and his contemporaries" and noted that Rogers has had a meaningful impact on the counseling and clinical areas of psychology.

In an article published in the “General Psychologist” newsletter of the Society of General Psychology in 2017, David Chirko characterized the 1962 dialogue between Rogers and Skinner as the “psychologists’ ‘debate’ of the century” and pointed to the two men and their ongoing influence. “The two respective systems of humanism and behaviorism survive and contribute very much today in the way those in the realm of psychology perceive how and why we behave in the ways we do and thereby what potentialities exist.”

Top image is from the June 11, 1962 issue of the UMD Summer Calendar