A Jewel of Environmental Learning 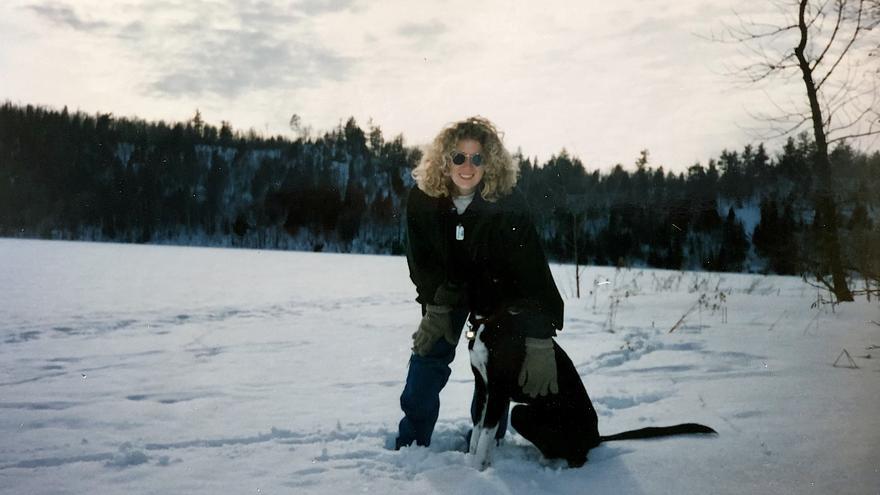 Debbie Waters Petersen was the first UMD graduate student director of the Boulder Lake Environmental Learning Center (BLELC). One of her most successful programs during her first year was a session on animal tracks. “Lots of people are interested in identifying animal tracks,” she says.

And that February morning about 60 people showed up for the program. “There were so many, we had to split them into two groups,” she says.

Petersen arranged for an area trapper, Dan Crocke, to help with the session. A day before the class, he had placed bait across the bay from the Learning Center building.

The group found a lot to see. They found tracks of rabbits, squirrels, deer, fox, martin, and weasels. Most surprising werewolf tracks from a few wolves, coming directly at the bait in a straight line. “The tracks came from the other side of the lake, as far we could see,” says Petersen. “They could smell the bait from that far. It was the coolest thing.”

The joy Petersen found on the wild land was balanced out by the struggle of learning to be a director. “It was trial by fire; I was it,” she says. “I was trained in biology and ecology, and I had learned how to teach and master 1,000 other skill sets, too.” She kept the books, found the instructors, led the sessions, and marketed the steady stream of public programs.

The moments of wonder made it worth it. Petersen tells one story after the next about those few years. There was the time instructor Judy Gibbs (UMD Environmental Education alumna) taught a program on wolves and ended by teaching the group to howl for wolves. “There were about 25 of us that night,” Petersen says. “We drove in a caravan to the east entrance and got out and howled.” Sure enough, the wolves answered back.

When Petersen was the director, the BLELC had the greatest density and diversity of songbirds in the State of Minnesota. She has lots of bird stories.

There was the time a group canoed across the lake to camp out, and they found a ruffed grouse and a nest of chicks. Once, she took her very young niece along on one of Boulder Lake's owl surveys.  Surveyors used playback of owl calls to elicit a response from owls at designated survey spots.  At one spot, they heard an answer. She and her niece witnessed two barred owls, a male and a female, calling to each other from across the road.

Banding birds loomed in her life. Petersen still conducts research on birds for UMD's Natural Resources Research Institute and other entities, but she got her start at Boulder Lake. She is now also a songbird bander, although owls are still special to her.

During owl irruption years, she and her friends would band Great Gray, Boreal, Snowy, and Northern Hawk owls. One time they banded “a ton of Great Grays,” she says. A mouse served as the lure, and when the owl landed, they flipped a landing net over it and quickly attached a band to one of its legs before they released it.

Petersen was Boulder Lake's second director. She was also the first graduate student director from the Center for Environmental Education, which is a part of the College of Education and Human Service Professions (CEHSP).

With a master's degree in environmental education from UMD under her belt, she spent 11 years at Duluth's Hawk Ridge Bird Observatory and now she teaches high school in Walker, Minnesota. “I teach all my ornithology classes how to band birds.”

From the texts and emails she gets from former students, it’s clear they enjoyed Petersen’s classes. “I start every ornithology class by showing the motion picture: The Big Year." It’s about three men who compete to see as many birds as possible in one year. And then, when Petersen's students are “pumped up,” she teaches them how to identify birds by sight and sound, eventually moving on to banding songbirds and woodcock chicks. And, some of them become, as she says, "bird nerds."

The BLMA was conceived in 1988, was formally established in 1991, and contains over 18,000 acres of land and water, eighteen miles north of Duluth, Minnesota.  The area is cooperatively managed for natural resources by the BLMA landowners: Minnesota Power, the St. Louis County Land Department, and the Minnesota Department of Natural Resources (MDNR). That set of partners formed an alliance with  UMD's Natural Resource Research Institute (NRRI), and in 1994, Jerry Niemi, the director of NRRI’s Center for Water and the Environment, brought Ken Gilbertson, the director of UMD's Center for Environmental Education, on board.

Over the years, workshops and speakers remained a mainstay, but several other larger programs have been offered, including the popular Master Naturalist Volunteer Training, Woodland Advisor classes, non-timber forest product workshops, and others. The number of participants has grown from a few hundred people a year to over 10,000. Many things have stayed the same, such as the Tracks and Traces outing, however, the number of workshops, hands-on training, and public events has grown.

Numerous scientific studies have taken place and are still underway, including the Great Lakes Worm Watch and a UMD Medical School Duluth and Minnesota Department of Health monitoring the status of mosquito and tick-borne diseases. In addition, external research partnerships have been added such as the Environmental Protection Agency Tree Swallow project to study potential impacts of polyfluoralkyl substances (PFAS), the Emory University's White-throated sparrow genetic study, and the University of Minnesota and Minnesota Department of Natural Resources' jumping worm documentation. Current director, Ryan Hueffmeier, ([email protected]) says they are always looking for more organizations to conduct their research at Boulder Lake.

Beginning in 1994, Gilbertson provided student directors to the BLELC. Except for the first director, Kent Montgomery, and NRRI researcher Cindy Hale, they were all graduate students in the Center for Environmental Education.

Petersen is proud of her role in the history of the BLELC. She knows why thousands of UMD students and residents continue to enjoy Boulder Lake every year. "The place is incredible," she says.

About the UMD Center for Environmental Education (undergrad and graduate degrees)

Stories from the Past: The Rare and Remarkable